How to Retrofit your Denali Headlights.

Here is my How to on retrofitting the factory Denalis.

the parts you will need are

The first thing you need to do is remove the Mounting Bracket, It should be 4 screws and 1 nut (10mm socket on mine)

Now you have the 2 screws that hold the projector into the housing. You can see last time i used a clear silicone.

Still leaving plenty of meet left on the projector.

**NOTE** Make sure you run the wires for your cutoff plate through the opening before putting the plate all the way onto the projector.

Next is to start putting your bolts and nuts through the plate and projector to pair the 2 together.

** NOTE** Start each nut and get them evenly on before you go snugging stuff up, because the way the projector is, it can tighten one part to much, making the plate sit way crooked making the other bolts impossible to put in.

make sure you have it centered and start snugging up the bolts (it should basically be center, but after tightening, make sure it doesn't get pulled a certain direction by the bolt.

The one bolt hole is off in the plate, not by much, and not nearly enough to make a difference. Remember we are holding a 1lb retrofit projector in place not a wheel and tire.

**Note: I saved the crooked one for last to tighten since it would be the most likely to pull the plate a direction.

The other sides bolts are perfectly flat.

The next step is to put the silicone on where the plate attached to the housing. The red also lets me show the silicone a lot more

**NOTE** do not use a ton of silicone on this part, it can get into the housing making it look like shit and get everywhere.

Then put your plate in and bolt it down, the projector is large, i had to get mine to kind of pop over the housings lip to where it will sit flush, It may take a little bit of wiggling.

Then you seal up the projector to the plate. Mine was messy because i lost the tip to the silicone tube,

You can also see the little plate that TRS sends with the projector, it is held on by 3 tiny screws, that's what holds the HID into the housing.

THen just put the mounting bracket back on the way you took it off and you are pretty much done.

I'll add a couple of tips also. When you tighten the adapter plate onto the projector, tighten the bolts in a cross pattern. That way it will stay somewhat flat. On the inside of my headlight I had to trim some of the plastic where the solenoid is for it to fully seat. A couple minutes with a dremel took care of that easily.

BOO5TED said:
I'll add a couple of tips also. When you tighten the adapter plate onto the projector, tighten the bolts in a cross pattern. That way it will stay somewhat flat. On the inside of my headlight I had to trim some of the plastic where the solenoid is for it to fully seat. A couple minutes with a dremel took care of that easily.
Click to expand...

Thats what i was trying to say with the start all the bolts and snug them up before tightening part,

also the dremel would have made it easier to get the shutter past, i just wiggled mine until it popped right in.

Did you not put in a shroud eg. mini gattling?

No, they dont work with the denali's unless you open up the lens

With the Denali style lights you don't need a shroud. 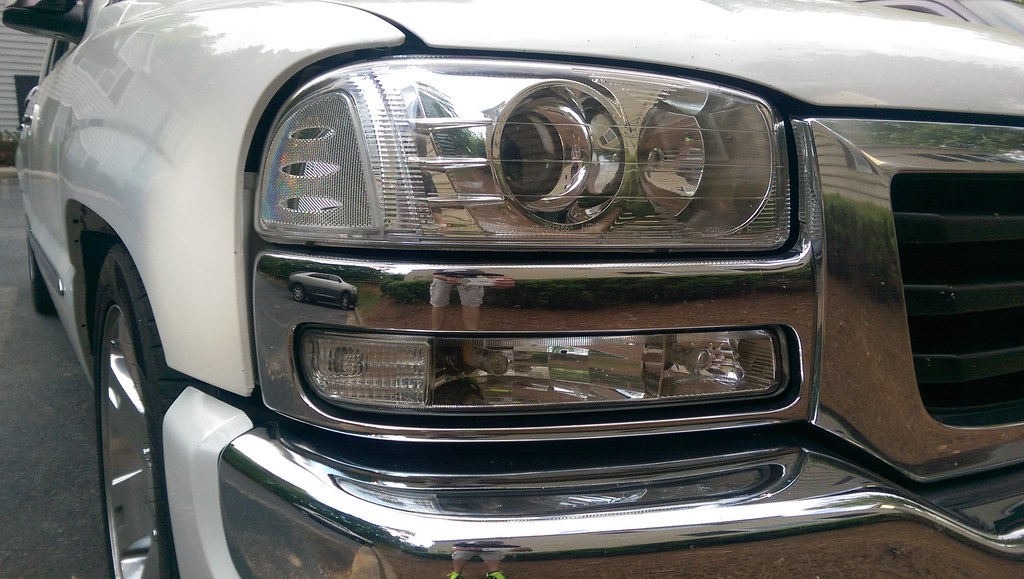 but you cant use them with this application, they are more to cover up the hacking you do for a housing that didnt have a projector originally.


Cheeny23 said:
No, they dont work with the denali's unless you open up the lens
Click to expand...


BOO5TED said:
With the Denali style lights you don't need a shroud.

Check out the current For Sale thread for more info:

Did you get the LHD or RHD projector? Is an HD harness needed for H1 or 9005?

LHD projectors for left hand drive. If you get the RHD projectors the cutoffs will be going the wrong direction. I did my retro and for over a year didn't run a harness. I have one now only because it came with the new ballasts that I ordered. It's not needed but it's recommended.

yea just both LHD and i do not have the harness either.

So the harness isn't needed unless I want to tap the high beams into the same harness and eliminate the stock plug?

You can plug the high beam directly into the bi-xenon solenoid control wires coming off of the projector, which means you'd have a bulb in your high beam spot just chilling there, OR you can get a high beam splitter harness, such as this:

That way when you trigger your high beams, it'll split the power going to your high beam bulb, and also power the projector's bi-xenon functionality.

all you need to do is get the electrical connectors that let you splice into a wire, and splice into the the high beam ground and high beam pos. to operate the shutter and still have a working highbeam bulb, its like 2 bucks worth of connectors.

You'll curse when you need to remove a headlight, but I took mine out for fun it seems lol.

I had them out pretty damn frequently installing different switchbacks and shit.

if you buy the right connector, you wont, it will just have a plug.

True, the $10.00 splitter is convenient though. Actually, they have a diode built into them, and I'll be using a set eventually to wire up my fog lights to stay on with the headlights, and it won't back feed into the factory wiring.

Oktain said:
True, the $10.00 splitter is convenient though.
Click to expand...

This is true, but Bryan is a jew :so:

Oktain said:
Actually, they have a diode built into them, and I'll be using a set eventually to wire up my fog lights to stay on with the headlights, and it won't back feed into the factory wiring.
Click to expand...

Can you not use the diode method like the previous versions on the GMT K2XX?

How much better are the new 6.0+ mini h1s than older versions? I think I might have the mini h1 2.0s lol